There is rapidly growing interest in vertically stacked van der Waals materials for electronic device applications. In such structures the interfaces between different materials will, in general, be misoriented with respect to each other. THz cutoff frequencies have been predicted for such devices. Understanding the effect of the misorientation on the interlayer resistance is required to fully understand the design requirements and performance of proposed vertically stacked devices.

The most well studied and well understood of the van der Waals material are graphite and graphene. The effect of misorientation on the electronic structure of bilayer graphene has been studied extensively both theoretically and experimentally. After a few degrees misorientation, the in-plane dispersion becomes linear, and after about 10 degrees misorientation, the in-plane velocity is the same as that of single-layer graphene. Thus, the two misorineted layers of graphene act as if they are electronically decoupled. 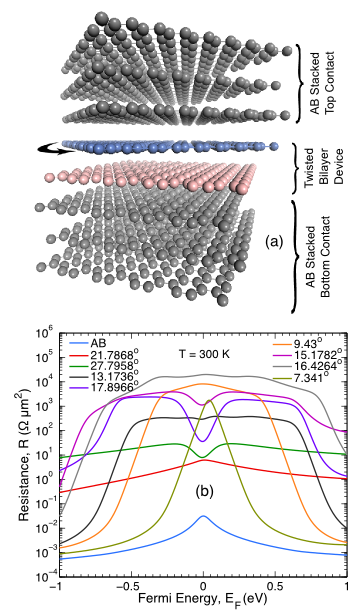 Rotated interface of AB stacked graphite: (a) Atomistic geometry and (b) room temperature coherent contact resistance of twisted bilayer graphene as a function of Fermi energy for different rotation angles.

We determined the coherent, interlayer resistance of a misoriented, rotated interface between two stacks of AB graphite for a variety of misorientation angles. The quantum-resistance of the ideal AB stack is on the order of 1 to 10 mΩμm2. For small rotation angles, the coherent interlayer resistance exponentially approaches the ideal quantum resistance at energies away from the charge neutrality point. Over a range of intermediate angles, the resistance increases exponentially with cell size for minimum size unit cells. Larger cell sizes, of similar angles, may not follow this trend. The energy dependence of the interlayer transmission is described.